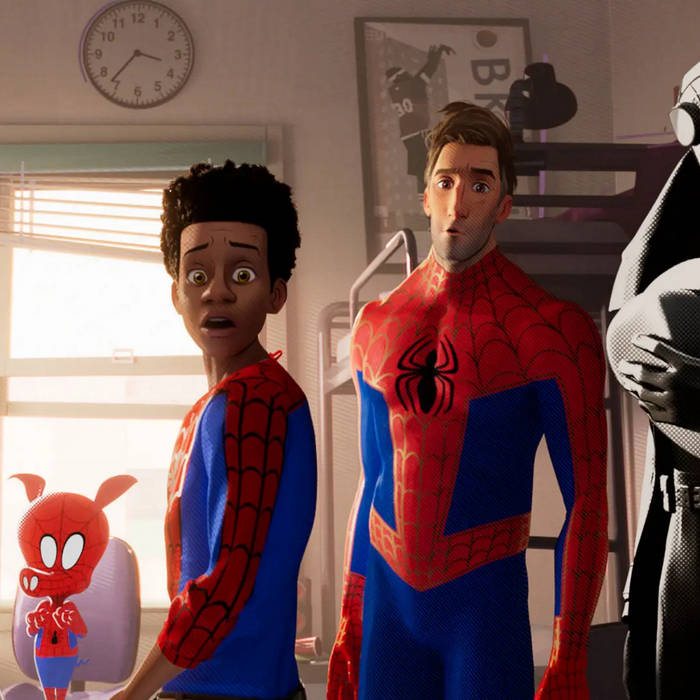 This starts out with a straight cover of the theme from the 1966 animated series "Spider-Man" -- sing along!

Then things take a turn. Several turns, depending on which parody I wrote at the time.

Second: Chris Barkley mentioned that there are a lot of Spider-Mashups. There are. I didn't even get into Spider-sonas. I may soon.

Third: RJ Johnson noted that "Spider-Man" scanned with "Mother's Day". And away I go!

Fourth: David Gerrold twisted the title of the newest movie, "Spider-Man: No Way Home" into "Home Alone: Spider-Man". And away we go!

Spider-Man, Spider-Man,
Does whatever a spider can.
Spins a web, any size,
Catches thieves just like flies.
Look out! Here comes the Spider-Man.

Is he strong? Listen, bud --
He's got radioactive blood.
Can he swing from a thread?
Take a look overhead.
Hey there! There goes the Spider-Man.

In the chill of night, at the scene of a crime,
Like a stream of light, he arrives just in time.

Spider-Man, Spider-Man,
Friendly neighborhood Spider-Man.
Wealth and fame, he's ignored --
Action is his reward... to him,
Life is a great big hangup,
Wherever there's a hangup,
You'll find the Spider-Man!

Is it strong? Fiberglass
With eight legs to support your ass.
Chrome and steel, polished sheen,
Makes you feel like the Dark Elf queen,
Hey there, there goes the spider-chair.

In the chill of night, it’ll move on its own
You can scream with fright, or at last claim your throne!

Spider-chair, spider-chair,
Find your destiny sitting there,
Weird and strange, there’s no doubt,
But you’ll freak people out
So bad,
Life is a set of choices,
Time to find what your voice is,
Rule from your spider-chair!

Spider-Fan, Spider-Fan,
Loves whatever a spider can
Takes two things, maybe three,
Starts a new legacy
Mashups! Made by the Spider-Fan!

Is he cool? Listen, Fred,
Juggles ten fandoms in his head
Can he swing at a con?
He can dance till the break of dawn
Right on! Party on, Spider-Fan.

When a paaaa-nel gets
Hijacked by some dull troll
he blocks and resets
With his wit, quick and droll!

Spider-Fan, Spider-Fan,
Local, regional Spider-Fan
Wealth and fame, he avoids,
Spends his cash on some cool new toys
And books --
FIAWOL is his dictum,
Till the hotel evicts him,
You’ll find the Spider-Fan!

Mother's Day, Mother's Day,
Second Sunday of every May.
Set aside, just to praise
She by whom you were likely raised.
Look out! Here comes the Mother's Day.

Is she strong? Listen, bud.
You got hurt, she'd mop up the blood.
Can she use sewing thread?
Look at those clothes you'd shred --
Intact! That's just a Mother's way.

In the chill of night, when you're running around,
She turns on the light, glaring in her night gown!

Mother's Day, Mother's Day,
All the small things we should repay.
Wealth and fame, she's ignored,
Your happiness is reward
To her!
She is what makes you stellar,
Now is the day to tell her,
So Happy Mother's Day!

Spider-Man, Spider-Man,
All his friends went to France again
Pete messed up, in a bind,
Missed his flight, left behind,
Look out! Home Alone Spider-Man.

He might throw in the towel,
Old Man Jameson’s on the prowl.
Harry and Marv case Aunt May’s,
They work for Kingpin these days,
Hey there! Home Alone Spider-Man.

Who can help him out? Tony Stark, Doctor Strange?
Never fear or doubt, ‘cause some things never change.

Spider-traps will prevail,
Marv and Harry go back to jail.
For fans of the movie show --
Macaulay Culkin’s cameo.
It’s him!
Jameson turns out all right,
Peter gets on the next flight,
Home Alone Spider-Man!